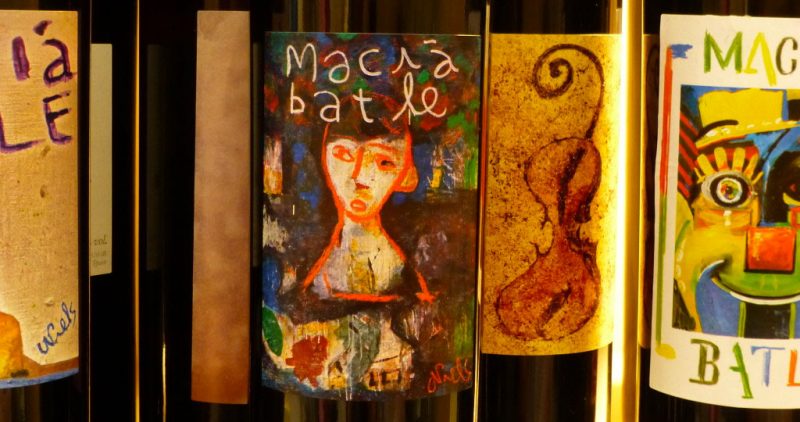 The Moors swept through Mallorca in 903, and stayed until they were expelled by a resurgent nationalistic shock-wave spearheaded by King James I of Aragon in 1229. The name Alaró has its origins in the Muslim farmhouse Oloron. The small tidy village merits a visit but today we head for the Castel d’ Alaró, the fortification that stands precipitously atop the Puig. Reaching it is a 2 hour walk from the valley, along a mostly easily passable footpath. Today we shorten and drive the first part of the route along the graded but unsurfaced track to the car park at Es Verger.

The Castel is an amazing feat of construction, perched atop vertiginous vertical rockfaces either side of the fortification. The first records have it as the final island stronghold of the moorish occupants of Mallorca. In 1285, it saw the last stand of Guillem Cabrit and Guillem Bassa, the two heroic figures fighting for King Jaume II of Mallorca before they were overcome by the troops of King Alfonse II of Aragon. They were executed on the spot by being roasted alive over coals. The current ruins date from the 15th century. Within the Castel stands the small chapel of Mare de Déu; alongside it is the recently restored cafe and overnight hostel. The restoration was finally completed in 2012 after more than a decade of work transferring building materials via helicopter and donkey. After taking in the views, we head down the footpath carrying some excellent home-made cakes bought from the café. They make the journey, albeit a little battered by the time we sit to eat them for breakfast the next day.

Es Verger is rightly famous for one thing, paletilla de cordero (shoulder of lamb). Rick Stein now famously described it as ‘the best lamb I have ever tasted’ when he stopped here. The restaurant itself is a testament to authentic rustic cuisine. The main part is in a barn set over two floors, with concrete floors, bench tables and plastic table cloths. Don’t be fooled. A cadre of ladies stoke the large fires and from time to time you will see them add more lamb to cook ever so slowly, in preparation for the next sittings. The food is excellent. Lamb, roast potatoes, salad and a carafe of wine amongst the bustle of the restaurant guests makes for a memorable and well earned lunch after the morning walk. It all needs finishing off with a bowl of cremat. An earthenware pot full of brandy, rum, cinnamon, whole coffee beans and lemon peel, served hot. It will be my turn to drive next time.

From here onto Macià Batle. The winery is rightly famous on the island, the owners having invested substantially in modern wine-making techniques to produce some truly interesting and varied wines.

If you can plan to arrive in between the coaches and their parties, you will be in for a rare treat. We are a little early (two coach parties are still here) so we head off for a tour of the winery. The owners are happy to let you wander unaccompanied, which is what we do. Every time we visit, I remain mesmerized by the sheer number of bottles, in cellar after cellar, all carefully stored as the wines inside mature, awaiting labeling before their final trip to wherever they will be enjoyed. When we emerge, the last of the tourists are re-boarding their coaches.

We are utterly spoilt by the staff who find us 4 seats by a table just outside the bodega in the sunshine and bring one excellent wine after another to try. The wines are interesting and bursting with flavor. They add fuel to our already excellent mood and the afternoon turns into an unexpected spontaneous time of (increasingly tall) stories and laughter. As we settle in the staff also bring tapas: sobrasada, varieties of olive pastes to be eaten on small toasted breads, some cheeses, olive oils in which to dip bread. An hour later and we are at risk of not being able to find the way home. We buy a mixed case, reds, white and rose, and head off. They could not have done more to finish of a delightful day. Thank you. You should try to fit Macià Batle into your exploration of Mallorca if you can.

The Moors in Mallorca: https://www.saudiaramcoworld.com/issue/196506/majorca.s.moorish.memories.htm